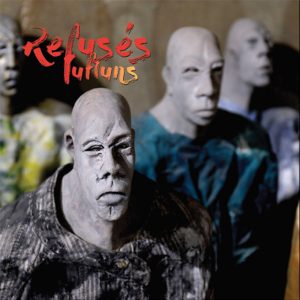 Supergroup. There is no other word to introduce Fufluns, a combination of incredible talents ‘borrowed’ from bands such as Il Bacio della Medusa, Prowlers, Daal, Tilion, Mr.Punch, La Bocca della Verità, The Watch and Egoband. And when you find yourself in front of a supergroup you can (and should) only expect something super(b). And so it is.

The title of the work, instead, is inspired by Beppe Corna’s “Refusés” (who also lends his voice in the final track), seventeen sculptures made of earthenware, cloth and acrylic paint. They represent manhood’s social exclusion, looking like lonely masks with grotesque shapes. They wear clothes quite similar to straitjackets, forced by the strict society they live in. They are those who are outsiders by nature, silent and stubborn, celebrating their own kind of outcry. And these “refused” characters are transposed by the Fufluns in reality, through cruel lyrics (written by Cecchini) that deal with current issues, real, guilty forgotten by all (or almost), with a high-level alternation of violence and poetry, anger and melody. In “Refusés” you breathe the same air as the characters narrated, you feel their pain… you smell the stench of truth… there is blood… flesh… life and death (Simone Cecchini, words taken from the exclusive interview with Fufluns. Read it here in Italian).

And, as for the lyrics, also the musical aspect, which is developed through the exceptional performances of Costa, Coloretti, Mariotti and Freddi, exudes pain and, compared to the debut “Spaventapasseri”, is more instinctive, more impetuous, but without missing the harmonious and poignant side. And, again, as for the lyrics, given the concept of the album, at a superficial and not very careful analysis, this last “antithetical” characteristic could seem at first sight out of tune, but it is, in fact, a crucial element that makes the whole even more credible and extraordinary, a perfect piece of a perfect album.

The lyric focuses on children’s exploitation inside Sierra Leone’s diamond mines. This “Blood Crystals” market encourages guns trafficking and children pay the price, as usual, of this endless war. The well known “a diamond is for ever” theme seems to turn into the sentence “a mutilation is for ever”. At the end of the song, the main character’s dream to become a soccer player breaks down into a hospital bed.

On October 12, 2007, after been found guilty of keeping some cannabis plants inside his home in Pietralunga (PG), Aldo Bianzino got arrested and locked up in Capanne’s jail. There, he was later found dead. His son Rudra and wife Roberta were only allowed to see Aldo’s body until after his autopsy.

Dodici di Ottobre sorge ora il sole / Sono entrati in cinque fanno un gran rumore / Rudra abbraccia il padre che non tornerà…. […]. A black cloak immediately descends at the start of Martirio d’un Falegname, amidst Sabbathian distortions and an Antonius Rex-like atmosphere. The final explosion comes with the violent entry of Cecchini. Then space is given to touching poetry with the voice/piano duet, a bit like Banco. Gooseflesh. Everything changes a little further, ranging between Kraut electronics and Battiatian experimentation, before returning to the initial path. And there is still time for another moving moment before tiptoeing away.

Iris, alias Italia Donati, was an italian teacher who got slandered, leading her to commit suicide. She didn’t support the countless sexual proposals made by Porciano’s village major, where she worked. The whole community considered her as a loose woman. For this reason, in the night of May 31, 1886, she walked in the dark to the old mill near Remaggio’s river, stopped her long skirt with two pins to avoid public humiliation from being found with open legs, jumped in the water and drowned.

A spiritual atmosphere, almost Camisasca-like, pervades the first moments of Canzone per Iris. Then the rhythms of Freddi and Mariotti change the register of the track, giving verve to the episode, with Cecchini throwing himself headlong into the new “picture”. But it’s a Fufluns song and so the continuous “change of clothes” is a must, and so it is that the opening segment returns with a slightly different character, especially on the doubled vocal side. Then it starts again with passion but it’s a non-stop emotional up and down, and so it will be until the end. […] Prendete questo corpo / Su cui pensate il torto / Punite chi mi rovinò / Possa il mio buon nome / Lavarsi del lerciume / Di colui che lo insozzò… […].

Omar Roberto Venturelli Leonelli was one of the priests who led the “Mapuche” community to Chile to conquer some lands given to European settlers, for this reason he was suspended “a divinis” by bishop Bernardino Piñera from his charge. He got married afterwards and became teacher to the Temuco’s Catholic University. On September 16, 1973, he got arrested after Pinochet’s coup, since then nobody got any news about him anymore.

On November 9, 1993, Croatian troops destroyed the ottoman bridge of Mostar city in Bosnia-Erzegovina. The Stari Most bridge was a symbol of union between the two parts of the city, populated by various ethnic groups. While hatred and death seem to rule above all, a child was born, becoming hope for a future renaissance. This child grows up and with him Mostar city returns to its ancient beauty. He’s the Stari Most diver, who’ll stand on the edge of the rebuilt bridge with a gesture of triumph.

Speaking of herself in this song is the spirit of the kurdish fighter Asia Ramazan Antar. She drew worldwide attention when, in 2015, a reporter took some pictures giving her the nickname of “the kurdish Angelina Jolie”. A lot of media also used these pictures only to talk about the similarities with the spanish actress Penelope Cruz. When Asia died on the battlefield, they reported the news with the title: The kurdish Angelina Jolie is dead”, continuing to point out the physical resemblance between the two woman and barely speaking about Asia’s battle against ISIS. Supporters of the kurdish side strongly condemned all this. Lyrics of the song take also inspiration by the poem “ I go, Mother” of the kurdish poet Abdullah Goran: “I go, Mother. If I don’t come back I will be a flower of this mountain, a fragment of soil for a world bigger than this. I go, Mother, if I don’t come back the body will explode where it tortures itself and the ghost will scourge, like a hurricane, every door. I go, Mother, if I don’t come back, my soul will become word to all poets.”

This song is a tribute to Friar Claudio Canali (main singer, flutist of the historical italian prog band “Biglietto per L’Inferno”) who decided to take a break from his musical activity to follow a religious life through the Hare Krishna movement. He said: “Here I found what I was meant to be, I freed myself from what I should have been.”. On the day he died, his spiritual brothers left this message to remember him: “Friar Claudio’s journey on Earth has ended. He now lies between Holy Mary’s arms.” The “ocean blue” colour is a pigment made by lapis lazuli used to paint Mary’s garments during medieval renaissance era.

Lascio la vita su cui voi edificate / Con tanto affanno mausolei / Di Fango e vanità… […]. Like a velvety caress comes the electric mandola (played by Mariotti) of Blu Oltremare. A long moment of calm continues with Costa’s touching piano and Cecchini’s tender voice. The continuation is really exciting with Coloretti that adds little “scratches” without affecting the feeling. But something is in the air and the path becomes more and more loaded, fiery, but without exceeding with useless preciousness. The last minutes are the ones that express more anger, among distorted guitars, drum solos and lively keyboards. But, in the end, Costa gives us another delicious taste of his piano, well “seduced” by Coloretti.

The sentence “Zvonok Putinu” means “a call to Putin” translated into russian security service common slang. This cruel torture tecnique consists of a dynamo that electrocutes the whole body passing through the earlobe of the prisoner. This song speaks out against homosexual harassment made in Chechnya. 27 people were taken from their homes and killed in the night of January 26, 2016, without being officially arrested first. Representatives of the local authorities, accused of having set up a concentration camp for gay people in Argun, replied saying: “There are no gays in Chechnya”.

And like a violent slap in the face comes Telefonata a Putin. It is Costa who initially “pulls the cart”, with his preciosity that moves conceptually between Festa Mobile and Fabio Celi e gli Infermieri. And almost immediately all the other bandmates jump on the “cart”, creating a very tight, red-hot song, with Cecchini inspired and furious. But as usual, with Fufluns you can expect anything and everything disappears among the diluted notes of Coloretti, a thin thread that gets slightly tangled with piano, voice and rhythms.  All is more intense and explodes again shortly afterwards. […] Bestie al gabbio chiuse a chiave senza più dignità / Questa vostra inquisizione non ci estinguerà!!!.

This is the voice of Aleppo’s children, in the north side of Syria that have died or survived to the bomb attacks. They are victims of an endless massacre almost ignored by everyone in the world, under a shameful silence. It’s a real tragedy, a whole country reduced to rubble with its citizens that are now refugees. Bombs destroyed schools, hospitals, markets and many other civil buildings. Those children, whose childhood was ripped off, can’t play or smile, not even cry anymore.

I don’t think it’s an exaggeration to nominate Refusés as Prog album of the year. Astonishing. 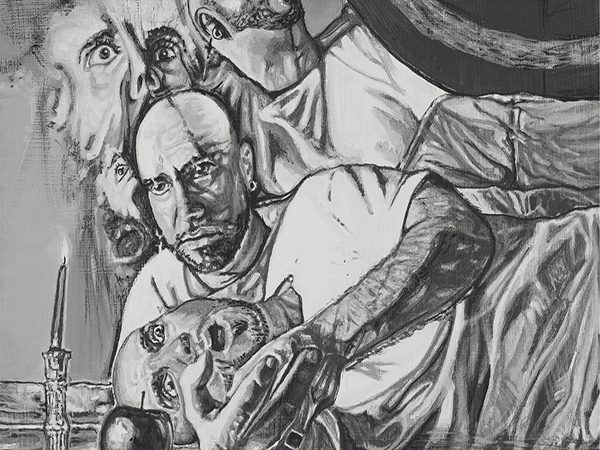