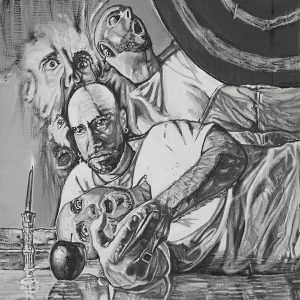 “Since I was a child, I couldn’t tolerate the tonal system. My perception only came alive in the presence of dissonance”.

“I make music because I want to listen to things I haven’t heard yet”. [Brief excerpts taken from a private conversation with Claudio Milano (who authorised its distribution)].

It is from concepts such as these that the approach to work such as INCIDENTI-Lo Schianto, Milano’s new album signed with the name NichelOdeon/InSonar & Relatives, begins.

If we add to this the “unusual” presentation of the album made by Snowdonia Dischi [It is with great regret that Snowdonia announces the release of NichelOdeon/InSonar & Relatives’ “INCIDENTI-Lo Schianto”. An album WORTHLESS (title attributed to each of the tracks): it’s not light and carefree, it doesn’t talk about rebirth in the “post-pandemic”, the singer of the project is not handsome, not pansexual and not twenty years old.”INCIDENTI-Lo Schianto” is poised to become Snowdonia’s greatest failure and Claudio Milano is proud of it (but without getting too big-headed)] and, moreover, you already know, at least in part, Milano’s production, so what is about to unfold to our eyes (and ears) is something simply unique.

Irrational, alienating, extreme, at least ten steps beyond the line demarcating “normality”: this (and much more) is Claudio Milano, an alchemist who has discovered his philosopher’s stone and who transforms ideas (as simple or as brilliant as they may be) into astonishingly surreal (or so real as to seem unreal) works.

E INCIDENTI-Lo Schianto (the first chapter of a project on the collapse of western civilisation) is, first and foremost, a record about overcoming anger through its liveliest investigation without any discount, to oneself above all. As a personal but not social conquest. And this overcoming of anger also occurs through the use of anger itself, whether it is expressed by voice or sound.

There is no musical genre to which it is possible to refer in order to “tag” the offer of NichelOdeon/InSonar & Relatives: its nature of “avant-garde and experimental collage” makes it an “alternative” entity, outside any sectarian classification. In it, first of all, there is the voice of Claudio Milano, incredible, prodigious, not from this earth, and he is able to shape it, transform it, rape it like a contemporary Demetrio Stratos (to put it in a banal way). And then there are the sounds (but also other voices): everything is abrasive, urticant, a river in flood (added to what Claudio offers) of genius and madness, two elements that go hand in hand merging into pure Art.

Milano blows against the flame of conformism, deforms everything that has a physiognomy that is even remotely recognisable, putting on the plate a sort of “controlled unconsciousness” that sublimates in the lyrics (not all written by him, actually) that span from social themes to the cycle of songs called “Legalised Holocausts” dedicated to those who died in the Mediterranean and in the pro-Soviet lagers for accusations of homosexuality. And the lyrics are something magnetic, magical, unique: hermetic or explicitly direct poems, rich in high cultural references, labyrinths of words in which it is pleasant to get lost.

Dulcis in fundo, the artwork: four paintings made by Claudio Milano with polymateric technique and relief on wood panel, four images in which pain and madness, the surreal element and the more straightforward one of INCIDENTI-Lo Schianto (and of Claudio Milano) come to life. And there are also four stickers that comically overturn what the cover says, and which are literally “to be stuck on” (as suggested by the stickers themselves).

Non Esistono. The welcome of INCIDENTI-Lo Schianto is one of those you don’t expect (or expect, if you have understood a little of what you are going to listen to). Complete vocal experimentation offered by Laura Catrani, with small sonic details and changes of setting well matched to the chameleonic voice: Opus Avantra thrown a step ahead. But before the new track can begin, a little electric tension doesn’t hurt at all. And the lyrics are pure, raw poetry: Avevano dita più lunghe di Michelangelo, / voci d’arcangeli e camminavano danzando. / Han visto la luce in uno sparo, / forse mai dal mio grembo, / da cui di notte li strappasti, / Cecenia, dicendo: / “non esistono, / non esistono!” / No, non esistono, / più.

Erica Scherl’s hysterical violin, excellently entangled with the unstable oboe (played by Evaristo Casonato) and fretless bass (played by Andrea Grumelli), stretch their arms in our direction in How Hard Tune!, before the host starts his breathtaking (and multi-layered) vocal flights monopolizing the attention. Hypnotic. […] I cani squartino le tue viscere in sogno, / lasciando soli, i tuoi calzini a pois, / dono a chi, come te, mente.

Variations on The Jargon King (on a text by Peter Hammill) takes shape in an alienating way, with Claudio putting his maximum “vocal load” exasperating the whole thing. And when also the pachydermic rhythms, the granitic guitars and the raped horns enter the scene, everything magically becomes R.I.O. (almost a sort of Art Zoyd “trampled” by doom broadsides). And the continuation becomes more and more delirious, with Milano’s “instrument” pushed beyond the limits of the possible and the sound element living its own life, schizophrenic. A warm and amazing episode.

A twilight atmosphere for Con Dedica, with Claudio’s singing/speaking as the absolute protagonist and the small sooty pieces creating a perfect contour. Sometimes it almost seems as if we are in one of Camisasca’s crazy “pictures” from “La finestra dentro”. […] Sappiamo tutti da chi o cosa farci consumare / non con chi creare […].

There is a Christmas and bucolic atmosphere in the very first notes of La Scatola, before Claudio begins to dialogue, in his own way, with the piano. […] C’è una scatola nera / tra le pieghe del mondo, / dove ogni volta che muoio, / c’è una dimensione che attende, me, / un labirinto dove passeggiare, respirando, / senza cercare uscita […]. What follows sees the artist himself zigzagging with his voice, even touching on poetic moments in the style of De André, while Evaristo Casonato’s woodwind work is also to be commended. But even the strings, well assisted by the rhythmic elements, stand up well to the vocalist, wandering incessantly and fearlessly. And everything becomes theatrical, almost phonodramatic (like Il babau e i maledetti cretini) in the second half of the track, before resuming the initial layout and gently relaxing.

An esoteric, magical touch is clearly perceived in L’ultima Sigaretta (Fantasmi ad Argun), with the composite carpets (made of strings, self-made electrified hurdy-gurdy, synth, zither and more, which will often return along the way) that completely and softly envelop the new vocal games of Massimo Silverio, Claudio Milano, Paola Tagliaferro (voice of all the mothers) and Cinzia La Fauci (voice of the ghosts), many tentacles that cling tightly without leaving any escape. And the fairy element becomes even more tangible as the seconds pass, before Casonato’s enchanting flute monopolises the scene, soon handing it over to new bewitched moments.

And advancing, as always, “in the dark”, comes Cento Vite, another moment on the edge of the bizarre, with Claudio who mocks the song “Mamma mia dammi cento lire”, sewing on it a sinister carnival music from past eras and a derisory song. […] “Madre mia quali cento vite che all’inferno io voglio andar” / “Cento vite dato ti ho, all’inferno no, non si può” […].

Il Coro dei Critici all’ultima Sponda del Commiato. And always with a strong sense of disorientation on us, it adds step by step to our journey, finding ourselves virtually surrounded by a series of televisions tuned to different channels, many alienating voices reaching our brains from every direction, with music/theatre made by Coucou Sèlavy, noise/concrete-industrial by the band and words extracted from the reviews to “UKIYOE (Mondi Fluttuanti)” by NichelOdeon/InSonar, written on the website Progarchives. com, selected and assembled in DADA style by Coucou Sèlavy & Claudio Milano.

Completely “out” Sabbia Scura with its increasingly altered and disturbing vocal layers and those sounds that follow in its footsteps. A liquid, dense flow that wets your feet, ankles, knees and more and more until you find yourself unable to move and breathe. Claustrophobic.

[…] Non gettare le mie spoglie, / che tutto ha un costo, sai […]. A new load of shifting and alienating sonic alchemy is brought to us by Nyama (Gettarsi oltre), the chameleon-like sound atmospheres leading between R.I.O. territories, fairytale moments, flashes of Canterbury and chamber music, with excellent string work and the usual Claudio over the top. And everything is tightly enveloped by a veil of tension that is always palpable.

La Montagna e il Trono takes shape amid poetry and agitation, with its sublime interweaving of strings and Claudio Milano keeping his main instrument in check. And it will be a continuous “bickering” among the voice, the strings and the rhythms, with violent moments and a new-found calm, with that touch of Aranis essence that doesn’t hurt at all. […] Perché dunque, sono un punto nero / in mezzo a legioni di fantasmi, / che si muovono come piccioni, / vestiti a rondini? / Qual è, qui in mezzo, / quello sguardo che non ho saputo fermare? / Ho inseminato il mio percorso per te, / di petali di rose, / ma c’è sempre un orco/porco, / disposti a ingoiarli, / per farti suo […].

And when the listening ends and the room becomes silent, you instinctively go back to pressing play. And again. 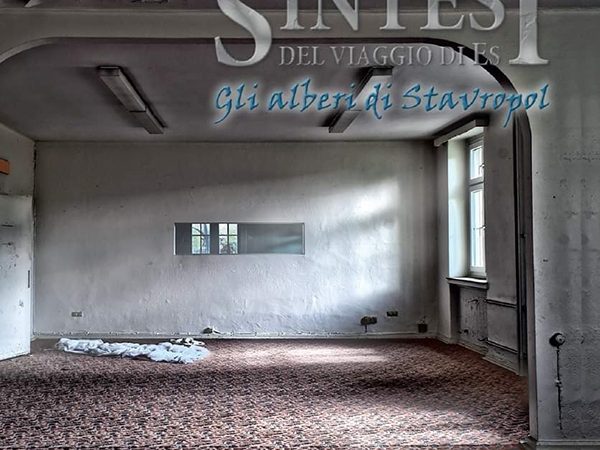 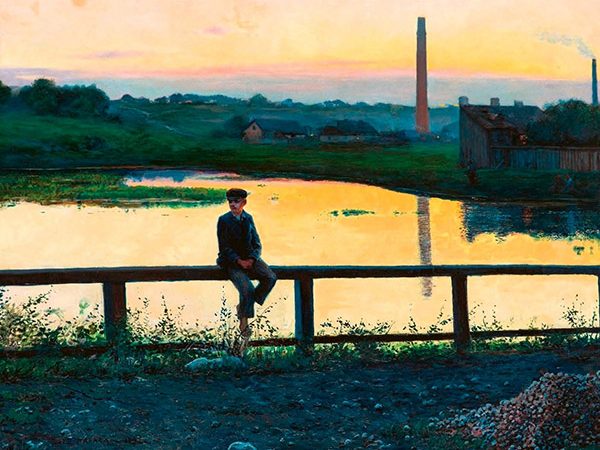 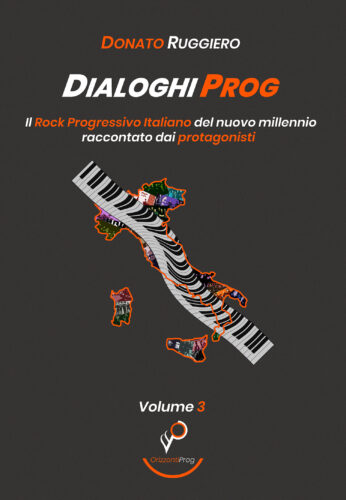